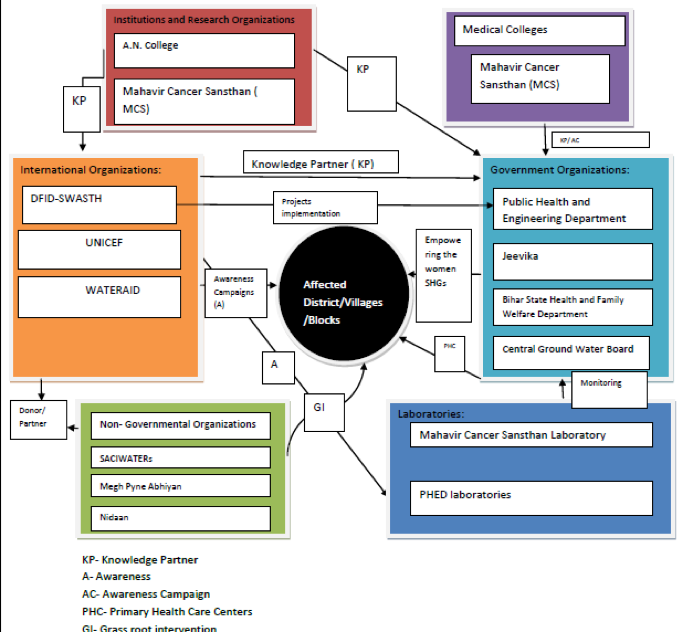 Arsenic is a persistent issue in many of the Ganga Brahmaputra Meghnad basin in India. However, even though mitigating the issue has gained momentum in many other states in India, Bihar remains largely grappled by faults in the institutional mechanism because of which millions continue to suffer silently in the state of Bihar. Still, the state of Bihar is experiencing technological intervention in mitigating arsenic as compared to the national mandates of following a socio-economic and demand driven approach of mitigation. This demand driven approach of water quality management seems to have been a failure in Bihar the result being lack of participatory approach towards problem solving in the state. The implementation agency continue to provide target based service and the villagers being unaware of the menace of Arsenic are not bothered to take up the responsibility of operating and maintenance of the mitigation technologies.

The ongoing researches in several affected districts reveal the lack of awareness which is primarily due to lack of a strengthened institution at the village level and also lack of primary health care centers to diagnose the effects of cancer. The researchers have several case studies from various affected districts that show the increased mortality rate among the villagers affected by arsenic. There have been cases reported in the Mahavir Cancer Sansthan (MCS) in Patna, Bihar, where a man was brought who had been suffering from arsenicosis from the past 25 years. The family saw 7 deaths and all of the subjects had the symptoms of arsenicosis. There have been several such cases reported in MCS which shows the continued misery that people are subjected to.

The study included interaction with various stakeholders to understand their roles in water quality management and also their respective roles in mitigating the issue of arsenic. Convergence has been identified by several background researches as a major reason for the failure of water quality management issues. Identifying the roles of each institution would help in enhancing the understanding on the possibility of convergence among various stakeholders.