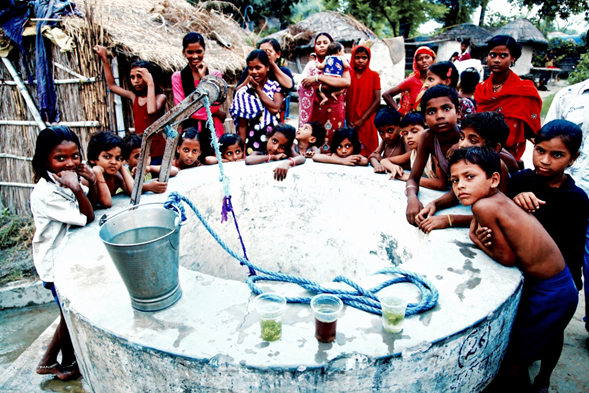 Deliberation on water in four districts of north Bihar – Supaul, Saharsa, Khagaria and Madhubani over 18 months (2005-06), helped in developing a local thematic for drinking water issues based on the insights, the exploration for the concept, utility, potential, technology, process, and contextual argument of temporary rainwater harvesting as a supplement system during ‘flood’ season, triggered MPA’s water journey.

After consuming rainwater in 2006, people across four panchayats in four districts expressed their want for accessing similar quality of water throughout the year. MPA initiated the second phase of the program in north Bihar by focusing its work on clean and safe access to drinking water. To achieve this objective grassroots workers were oriented towards groundwater, they were trained to conduct, analyze, assess and communicate water testing and its reports. In addition, MPA included an anthropologist in the team for strengthening the capacity of the team to deal with nuanced processes of comprehension, reflection, compilation, assessment, self-criticality, and implementation of the program.

In December 2007, the first water quality testing was undertaken across five districts, with Pashchim Champaran district getting included in the program. The results brought forth the issue of groundwater contamination, which was not really spoken about in the region. Along side, the emergence of arsenic and iron as major contaminants in groundwater became prominent, along with e-coli. Interestingly, the water quality results of dug-wells and hand-pumps differed in few places. Arsenic and iron were untraceable in samples from dug-wells, whereas it was prominently present in those from the hand-pumps. This peculiarity pushed MPA to further probe into the issue. One of the ways discovered for ensuring arsenic and iron free water was by engaging with the revival of dug-wells. The process of reviving dug-wells was a natural progression for MPA largely due to its commitment for instituting local practices that overcome social and economic barriers and ensures safe drinking water to all.

Dug-wells, usually a common property resource in most villages, can emerge as a clean, safe and arsenic and iron free local source of drinking water in the village, if managed properly. While initiating dug-well work, MPA team had to confront tremendous resistance from people.

Initially, people were not very open to contributing their services to cleaning and reviving the well and in many cases even deliberately under reported the number of wells in their village. On persisted efforts, the team enabled the understanding that community solidarity to rejuvenate wells is essential.  Further, such a process could facilitate easy access of safe and clean drinking water throughout the year, and minimize the risk of diseases, which occurs due to contaminated groundwater. In order to strengthen MPA’s argument, water testing results were used, which at least forced people to rethink their alliance with hand-pumps. It was this what caused the turnaround. Within a span of 4 months, 38 dug-wells were cleaned and 17 repaired as a collaborative effort between MPA and villagers.

On the whole, the dug-well work has created conducive atmosphere, which is instrumental in bringing people together to deliberate and develop a collective strategy to overcome their drinking water problem. Villagers got sensitized regarding the limitations of the present drinking water system and became conscious about the character of contamination and its impact on human health.

In two different arsenic affected villages in Khagaria and Pashchim Champaran districts respectively, the community has collectively shifted from hand-pumps yielding arsenic and iron water to a community owned dug-well. It has been approximately six years since the transition happened, and it is still going strong, with the community managing the two dug-wells.

MPA also experienced few reversals. In some communities, after the initial euphoria subsided they went back to handpumps, despite their knowledge about the groundwater contamination. The reason stated by them was of convenience. Regular maintenance is considered as a daunting task in comparison to the hand-pump facility. Access to individual water sources inhibited people from substituting it with a common source. Associating with a common source was akin to lowering of their status that they had recently acquired because of the hand-pump.

Any initiative that entails a ‘change’ also requires strong political will that is influenced by local knowledge and experiences, sound technical background and explanation along with proactive administrative support. However, given the scenario in Bihar, it is also imperative for the civil society to engage itself in creating a moral pressure for accepting the reality and subsequently adopting strategies for mitigating the problem. Otherwise, everyone would be waiting for yet another human forced disaster to strike.

Megh Pyne Abhiyan (MPA), a campaign and functional network was initiated in December 2005, since then it continued to work as an informal identity in the five flood prone districts of north Bihar. Contact: meghpyneabhiyan@gmail.com