Arsenic was a very rarely heard term in the water sector till a few decades back. However, in recent years, the number of areas reporting arsenic contamination have gone up drastically with over 20 countries from different parts of the world reporting arsenic contamination of groundwater (Bordoloi, 2012). With the constantly increasing number of occurrences, especially in the South Asian region, it is now recognized as a major public health concern affecting a large number of people around the world.

In South Asia, arsenic contamination in groundwater in the Ganga- Brahmaputra fluvial plains in India and Padma-Meghna fluvial plains in Bangladesh has been found to have a huge impact on human health and its consequences have been reported as the world’s biggest natural groundwater calamities. In India,  West Bengal, Jharkhand, Bihar, Uttar Pradesh in the flood plains of the Ganga, Assam and Manipur in the flood plains of the Brahamaputra and Imphal rivers and Rajnandgaon village in Chhattisgarh state have been reported to be affected by arsenic contamination in groundwater (Ghosh and Singh, nd)

What is arsenic?
Arsenic (As) is an odourless and tasteless metalloid widely distributed in the earth’s crust. Elemental arsenic is a member of Group VA of the periodic table, with nitrogen, phosphorus, antimony and bismuth. It has an atomic number of 33 and an atomic mass of 74.91.

What are the forms of arsenic available in nature?
Arsenic and its compounds occur in crystalline, powder,  amorphous or vitreous forms. It usually occurs in trace quantities in all rocks, soil, water and air. It is the 26th abundant element in the earth’s crust.

What are the different exposure sources of arsenic?

How does arsenic enter the human body?
Arsenic can get into the human body through drinking water as well as eating food that has been contaminated with arsenic

How does arsenic get into drinking water?

Because it occurs naturally in the environment and as a by-product of some agricultural and industrial activities, it can enter drinking water through the ground or as runoff into surface water sources.

How does arsenic become a part of the food cycle?
When agricultural fields are irrigated with arsenic contaminated groundwater, inorganic forms of arsenic get absorbed by the plants and hence arsenic enters the food cycle.

Is arsenic always harmful in food?
Arsenic present in inorganic forms  as arsenite and arsenate is toxic. However, organic forms of arsenic like arsenobetaine, arsenocholine, arsenosugar, are non-toxic (these forms are mainly present in sea foods).

What happens to the arsenic that gets inside the human body?
Arsenic in drinking water is absorbed through the intestine into the bloodstream through which it reaches the various organs. The human body normally gets rid of smaller amounts of arsenic through urine. However, if there are large amounts of arsenic, the remaining arsenic accumulates inside the body and can lead to adverse health effects. However, the mechanisms underlying the adverse health effects by arsenic are not completely known. The level of accumulated arsenic can be known by investigating nail and hair samples.

What is Arsenicosis?
Arsenicosis is the medical word for arsenic poisoning, which occurs due to accumulation of large amounts of arsenic in the body.
Arsenicosis leads to adverse health effects through inhibition of essential enzymes, which ultimately leads to death from multi-system organ failure.

What are the health effects of arsenic poisoning?
Arsenic causes or increases the risk of numerous illnesses. It leads to skin damage including keratosis and skin cancer, internal cancers such as that of the lung and bladder, and diseases of the vascular system. Other health problems, such as diabetes, cancers of the other organs and adverse reproductive outcomes have been observed, but the evidence is not yet conclusive, although it keeps increasing. 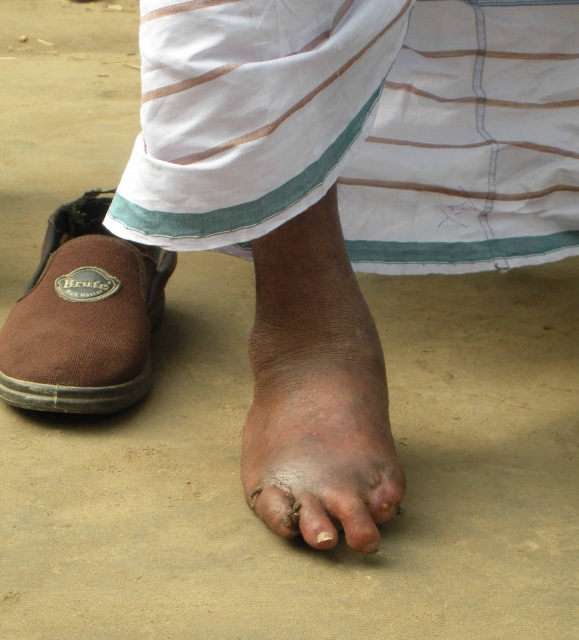 How much exposure to arsenic contaminated water is expected to result in skin lesions?
Evidence from the field has indicated that people drinking arsenic contaminated water for a couple of years may show arsenical skin lesions. The risk has been found to be more among people who are exposed to water contaminted with arsenic above levels of  500 μg/l . However, studies also indicate that even when exposed to a similar risk, all individuals do not display symptoms of skin lesions. The exact reason for this is not yet known.

Does boiling remove arsenic from water?
No, arsenic cannot be removed by boiling as it is not a volatile substance. Rather, its concentration increases as water evaporates during boiling.

Is arsenicosis contagious?
No, it is not contagious.

How can one know if their tubewell is arsenic contaminated?
Arsenic has no distinctive taste, colour and odour. After proper collection and preservation, the water sample has to be analyzed for arsenic from an authorized analytical laboratory. Certified field kits can also serve the purpose, but these kits are only indicative in nature and not conclusive.

What are the biomarkers of arsenic?
Hair, nails, urine and skin scales of the person consuming arsenic contaminated water.

Can arsenic affect an unborn child?
Although there is no evidence that arsenic can harm pregnant women or their fetuses, studies in animals have shown that doses of arsenic that are large enough to cause illness in pregnant females may cause low birth weight, fetal malformations, or fetal death.