Prevention, Detection and Management of Arsenicosis

Cap-Net newsletter published about the training organised by SaciWATERs on ‘Prevention, Detection and Management of Arsenicosis’   http://www.cap-net.org/2019/03/01/training-about-prevention-detection-and-management-of-arsenicosis-in-india/

Arsenic Knowledge and Action Network (AKAN) and SWACHA organised an exposure visit from Titabar to Majuli on 12 th and 13 th January, 2018. The main objective of this visit was to bring about an exchange of experiences and knowledge of the local water champions. The team was led by Mr. Ananta Khanikar. During the two day visit, the team interacted with school teachers, students...

Exposure visit from Majuli to Titabar

Arsenic Knowledge and Action Network (AKAN) and SWACHA organised an exposure visit from Majuli to Titabar on 18th and 19th December, 2017. The community people of the Titabar area have taken local-level initiatives to reduce the arsenic exposure. To strengthen the activities of the network the exposure visit was conducted, the main objective of which was to bring about an exchange of experiences and knowledge... 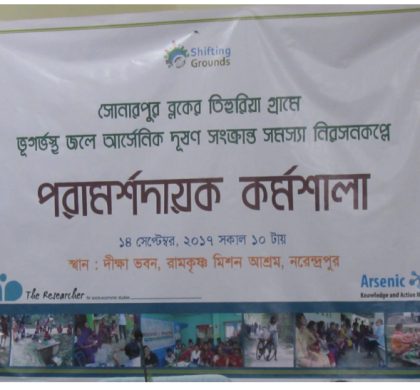 As a part of the research collaboration with The Researcher, West Bengal under the ongoing Shifting Grounds project, the results of the test of the water samples from both public and private tube-wells were disseminated through a workshop organized on 14th Sep 2017 at Diksha Bhawan, Ramkrishna Mission Ashram, Narendrapur, Kolkata. Report Download pdf

As a part of the research collaboration with The Researcher, West Bengal under the ongoing Shifting Grounds project, arsenic testing campaign was conducted in Tihuria village, South 24 Parganas in West Bengal. The water samples from both public and private tube-wells were tested through the Merck Testing kit and also at the PHED accredited laboratories. Map Report Download pdf

Khagaria is a district of Bihar. Earlier it was the part of the Munger district. Its sub-division was created in the year 1943-44. It was upgraded as a district, with effect from 10th May, 1981, vide Government of Bihar Notification no. – 7/T-1-207/79 dated 30th April, 1981. This region is a region of rivers. There is seven rivers flow through this region and due to...

My research area is Kairi village which is in Paschim Champaran and located in Gaunaha Tehsil of Paschim Champaran in Bihar. It is 25km away from the sub district headquarters Gaunaha and 70 km away from district headquarters Bettiah. When I visit this village for my field research to see indigenous knowledge related to safe drinking water among villagers. In the village I saw except...

Arsenic Knowledge and Action Network engaged with the arsenic affected communities in the villages of Simri block, Buxar in Bihar viz. through a two-day health camp, 20th – 21st March to identify patients affected with arsenic toxicity. Following this, focus group discussions and personal interactions were held from 22nd March -26th March so as to gauge the understanding and perception of the communities about the...