Arsenic Knowledge and Action Network supported two individuals from Kolkata and Assam for their participation in a Capacity building Workshop held from 1st- 4th March 2017 on household level water treatment technologies. The four day workshop and training program was jointly organised by CAWST and the Sehgal Foundation at Samastipur, Bihar. It was participatory by nature and the participants were drawn into the program through...

Arsenic Knowledge and Action Network was invited to participate as participants of a panel on ‘Learnings from global/national experiences in deliberating ideas for addressing WASH and infections pathway’ in a two day Partner’s Meet from 1st-2nd March 2017 organised by UNICEF in the backdrop of its Multi-Sector Integrated Programme called Swabhimaan. Swabhimaan tests the delivery of an integrated package of 18 essential nutrition (specific and... 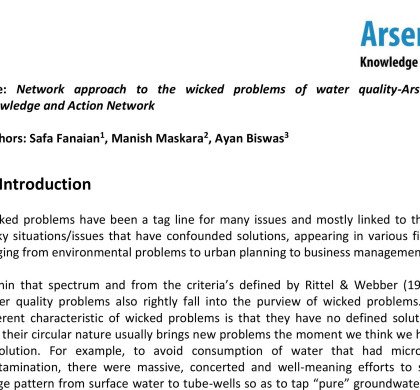 Arsenic Knowledge and Action Network was invited to attend Bhujal Manthan 2016 – a Conclave on Aquifer Mapping and Ground Water Management organised by Ministry of Water Resources (MoWR) and Central Ground Water Board (CGWB) at New Delhi. The proceedings of the conclave includes a working paper on Network approach to the wicked problems of water quality by Arsenic Knowledge and Action Network

Through the cumulative discussions, interactions and field engagement of Arsenic Knowledge and Action Network in Assam, since August 2014, the issue of arsenic in water for drinking came to be understood as a communication problem. The same highlighted the need for affected communities’ to be informed about the issue so that precautionary measures can be taken. Hence, a workshop was organized during 15th-16th June 2016...

Arsenic is a persistent issue in many of the Ganga Brahmaputra Meghnad basin in India. However, even though mitigating the issue has gained momentum in many other states in India, Bihar remains largely grappled by faults in the institutional mechanism because of which millions continue to suffer silently in the state of Bihar. Still, the state of Bihar is experiencing technological intervention in mitigating arsenic... 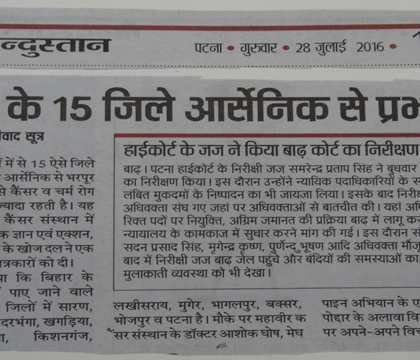 A press note was released on the occasion of the meeting held on 27th July 2016 at Mahavir Cancer Sansthan and Research Centre, Patna by the Arsenic Knowledge and Action Network. 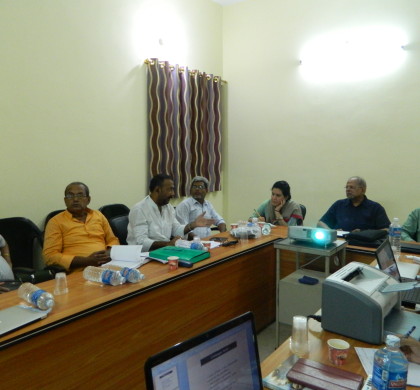 The Arsenic Knowledge and Action network in Bihar comprising of Mahavir Cancer Sansthan and Research Centre, AN College, UNICEF, Megh Pyne Abhiyan, Nalanda University, Samta, Water Action Bihar etc. met at Mahavir Cancer Sansthan and Research Centre, Patna on 27 th July 2016. It was also attended by media persons from different local print and electronic media. The purpose of the meeting was to discuss...